If you can’t afford it, buy a broken one and fix it.

I’d been on the lookout for a vintage turntable for a while, however I didn’t want to pay a large sum of money to have one. I didn’t mind if it was belt drive or direct drive, but was looking specifically for a 1970’s/1980’s brushed steel look.

During 2020, I found a gumtree listing for someone selling a JVC LA-11 Turntable for $25. The ad listed that it was not currently working and would require some repairs. I’m no expert in repairing hifi systems but I figured as long as the turntable was receiving power, I’d be able to troubleshoot and fix any other issues.
As it turns out, there were a number of different issues that required fixing, but that’s half the fun.

After driving across the city to pick it up, the previous owner told me that they had turned it on but found that the turntable wouldn’t spin. They also mentioned that while taking it apart, they accidentally broke the belt and the needle. Getting it home and taking it apart, I found that the centre spindle was hard stuck in its housing, which some research said was relatively common for these old turntables. The spindle sits inside the housing, spinning on top of a very small ball-bearing. Attempting to release it, pulling and turning it made no movement. I sprayed some WD-40 into the housing around the spindle but it made little difference. In fact, it made it harder to grip the spindle. Using plyers was out of the question as it would damage the spindle so it was just down to gripping cloth and arm strength. The key tip I found was to use a heat gun (or in my case, hair dryer) to heat up the spindle which after about an hour of work, finally allowed it to release. Cleaning out the old gunk, I re-oiled it and put it back together. 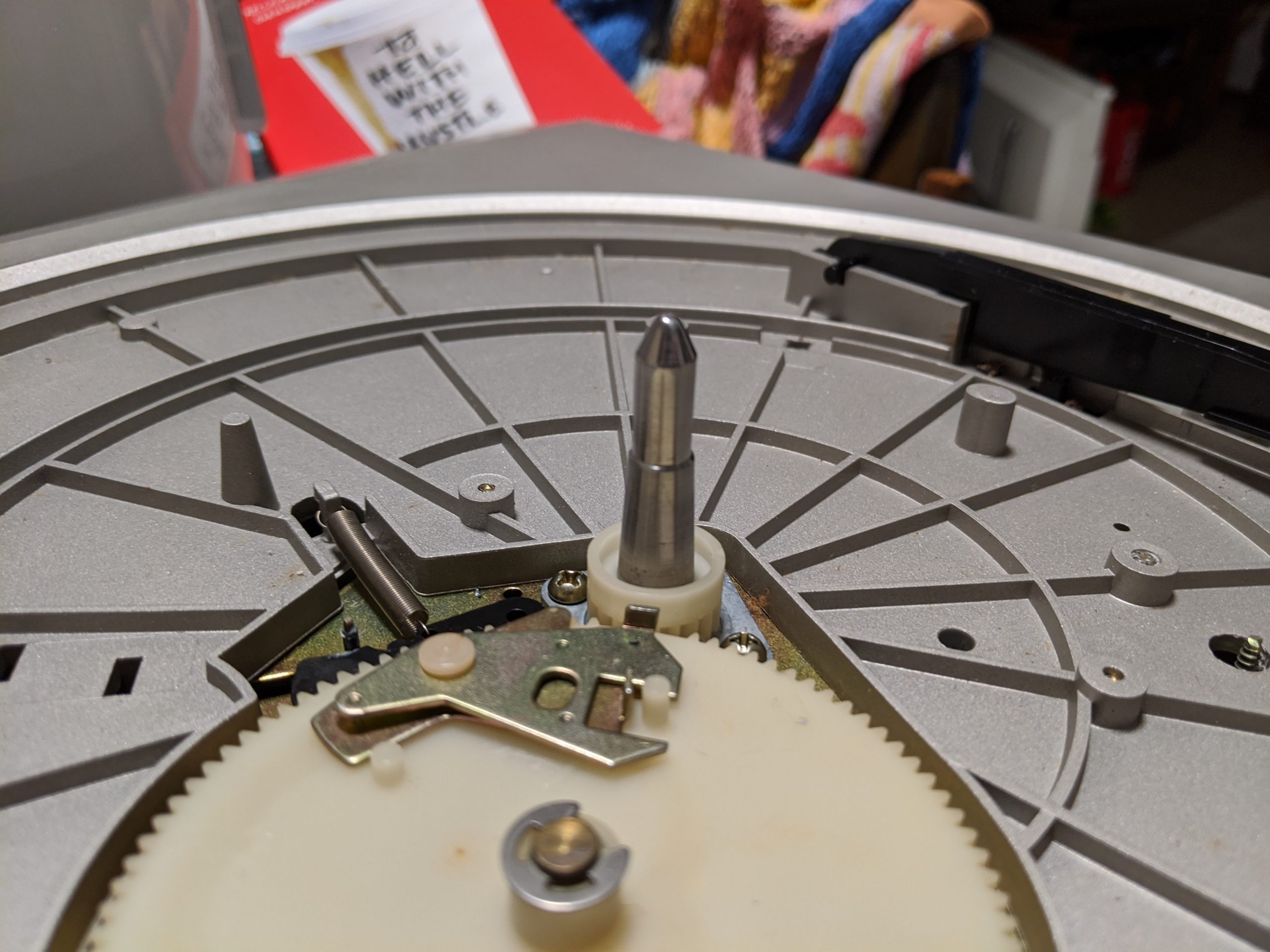 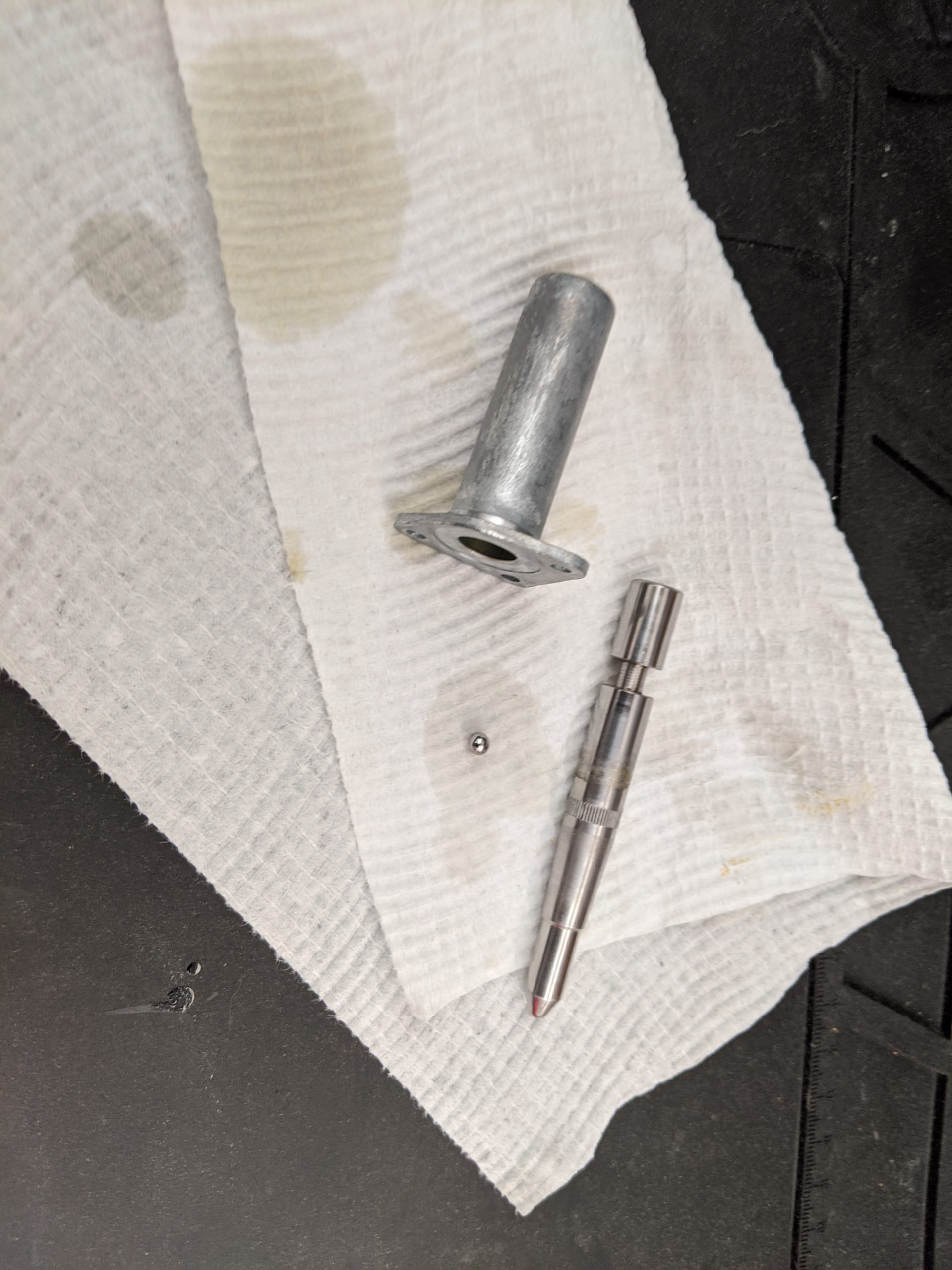 Next up was the belt. The old belt had disintegrated into bits, some of which were clinging to the turntable plate, others had broken off and were sitting loose in the chassis. I cleaned out the old bits of belt and ordered a new one from a hifi parts store. Once it arrived, I replaced it fairly easily and confirmed that the turntable span smoothly. Similarly, I purchased a new needle from a hifi parts store and fitted it to the cartridge.

With these fixes done, I hooked it up to the amplifier and confirmed that records played and sound is produced. This left only two issues left. The tonearm lift wasn’t moving the tonearm up and down as it was supposed to, and the lever to actuate it did nothing. This turned out to be one of the hardest parts to troubleshoot, taking many hours of research and staring at the parts until the mechanism made sense.

First of all, the actuating lever wasn’t working as it was gunked up and a few plastic parts had broken off. Thankfully after some cleaning and re-oiling I managed to get it working again. The harder part was the tonearm lift itself. The lift is essentially a piston (well more of a hydraulic cylinder I guess) where the actuating lever moves a grooved plastic piece which causes the piston to lift, and pushed up the tonarm lift. Once released, the tonarm lift should then smoothly and slowly lower down back to its original position. When opening the chassis, the mechanism had come apart and half the battle was figuring out how to put them back together in the correct way. The service manual was partly helpful but didn’t include a number of springs and clips in the figure. After multiple attempts or trial and error, I finally found the correct sequence of parts and had the lift going up, however it was dropping too quickly which could potentially damage the records. In order to fix this, I cleaned out the old oil from the piston and added some new oil. This was supposed to be 300,000 CST silicone oil, however I was instead sent 30,000 CST oil as the other was out of stock. Thankfully this worked just as well. 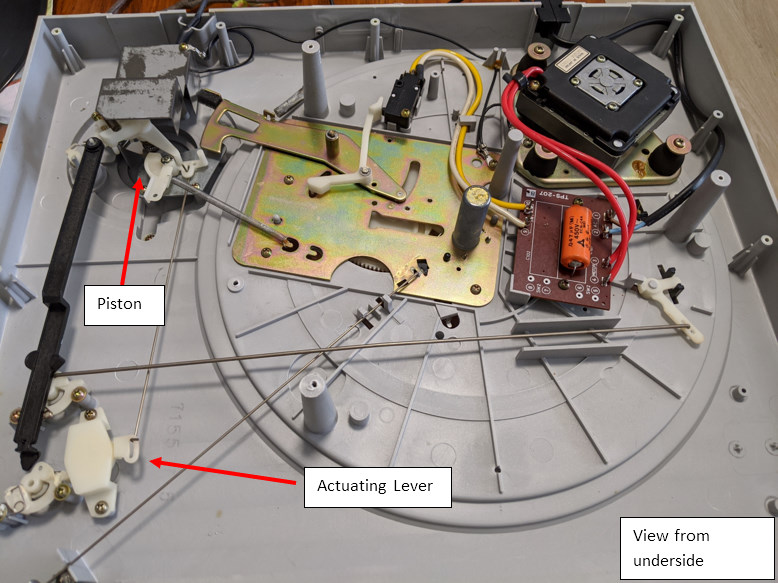 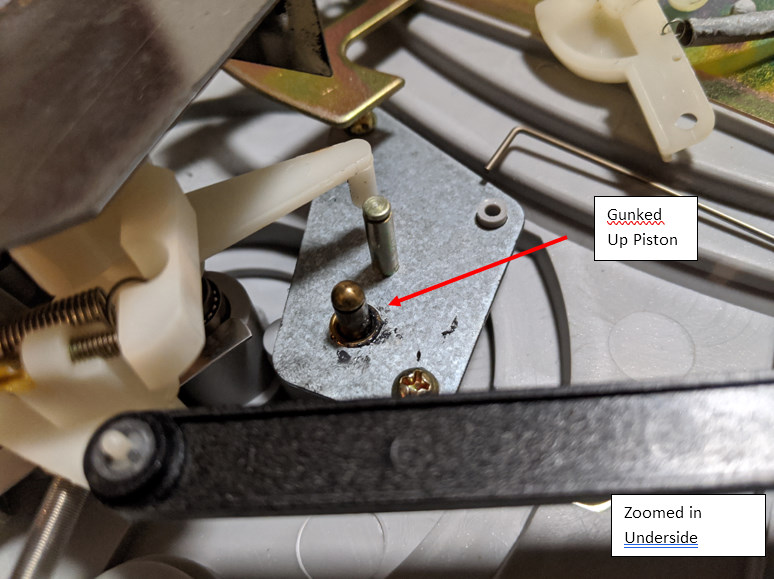 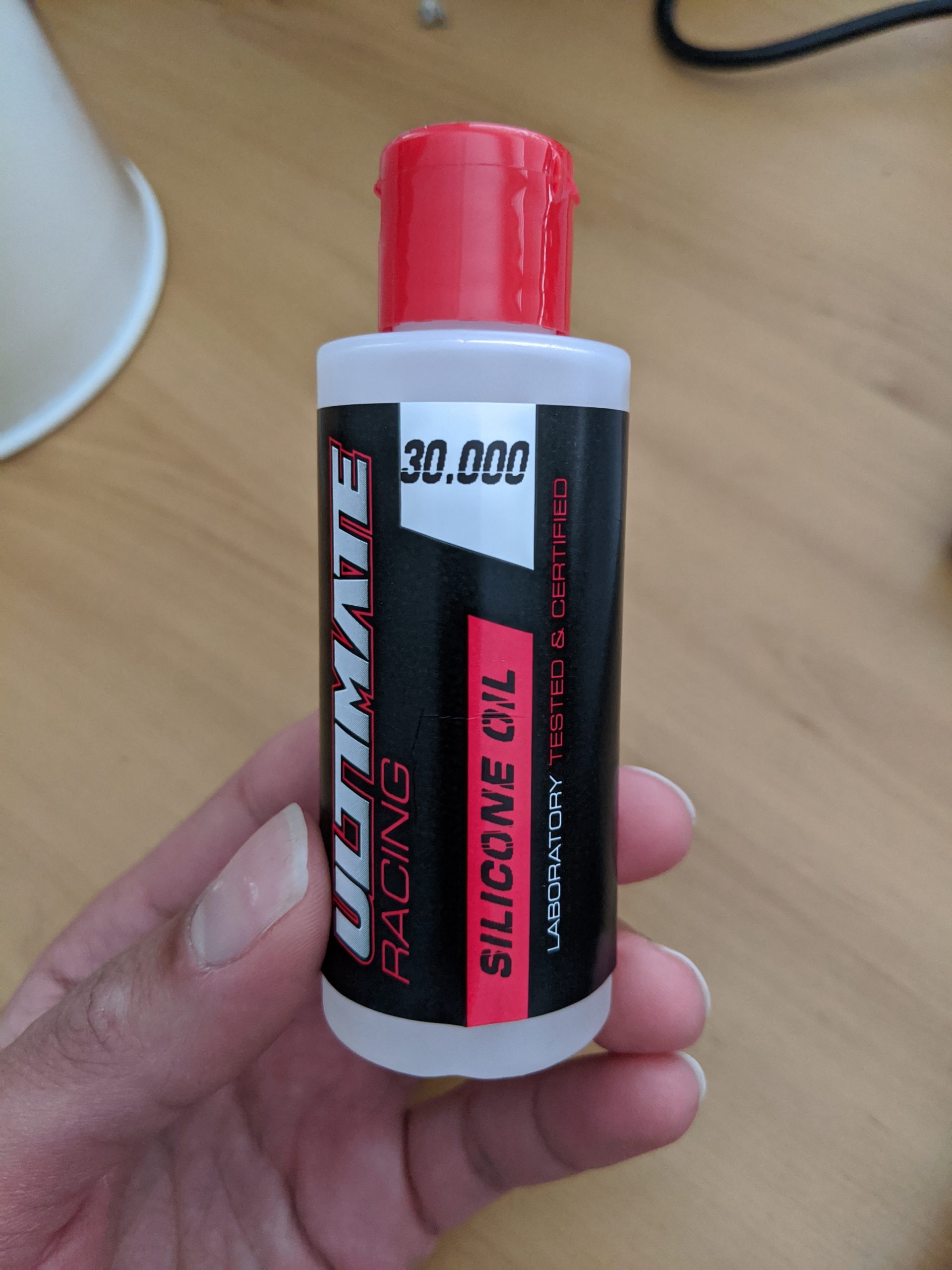 The turntable now works almost completely as new. It sounds great and we use it often. In future, I may address the one remaining issue – the plastic dust cover clips are broken so it doesn’t remain in the up position – however as these clips cost ~$60, I can live with that small issue for now. 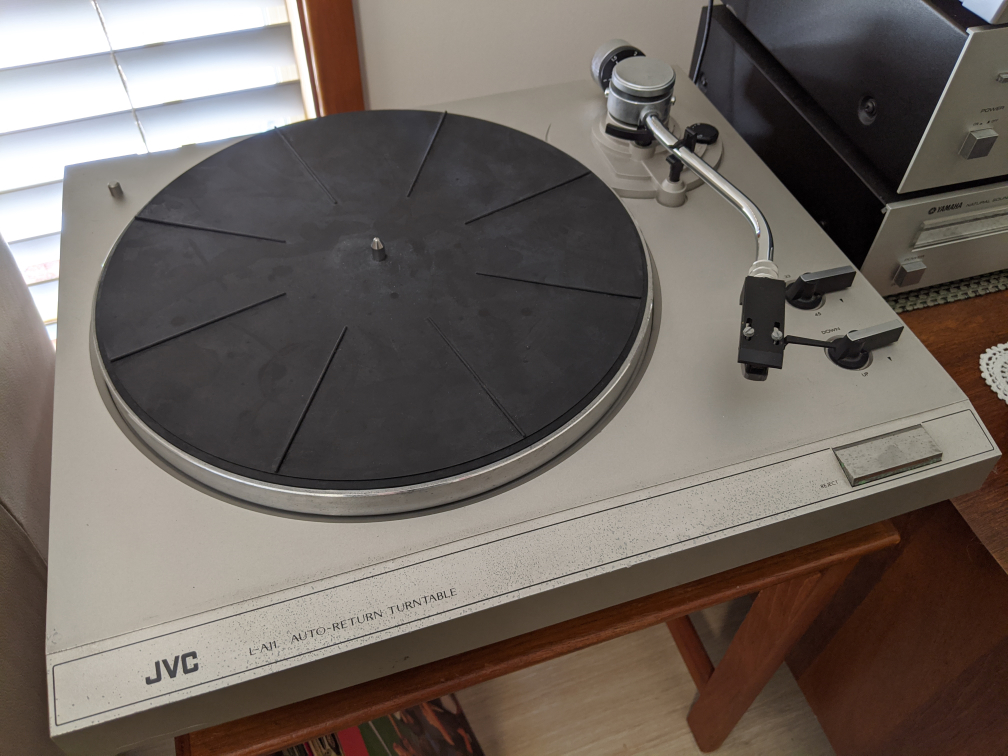 If you are ever interested in getting into old hifi systems, I recommend buying broken and fixing it yourself. It helps to give new life to things that would be instead junked, and you learn a lot along the way.